Cleared Hot! An Exclusive and Personal Photographic Journey into the U.S. Air Force

About the Collection
Veteran photographer Nicholas Price spent 18 months with the U.S. Air Force men and women in an attempt to capture on film the strength and courage of American service members.

Price,was granted unprecedented access to take over 8,000 photographs and cull from that collection the 60 black-and-white photographs, which mark the 60th Anniversary of
the USAF and which have been obtained by the Library of Congress.

"Cleared Hot!" is a U.S. Air Force command used to approve an action -- typically, the release or drop weapons.

Other subjects in the Cleared Hot Collection and Exhibition include:
1. Combat Warrior
2. The Face Of The Airman
3. Hardware & Equipment
4. The Home coming
5. Red Flag - The Ultimate Game
6. The Battlefield Today - B-52 &F22
7. Deployment
8. Pride & Joy - The Military Family
9. Veterans/MIA

THIS COLLLECTION IS AVAILABLE FOR N.P.I.T.E.S.
(The Nicholas Price International Touring Exhibition Service)
Contact us at office@naprice.com if you are interested in this collection for your next ehibition/event

Gen. John P. Jumper is Chief of Staff of the U.S. Air Force, Washington, D.C. as Chief, he serves as the senior uniformed Air Force officer responsible for the organization, training and equipage of more than 700,000 active-duty, Guard, Reserve and civilian forces serving in the United States and overseas. As a member of the Joint Chiefs of Staff, the general and other service chiefs function as military advisers to the Secretary of Defense, National Security Council and the President.

Gen. John Jumper Photo Copyright © USAF
Note: This is the original introduction and foreword especially written by General John Jumper for the companion book and exhibition of the Cleared Hot! Photography Collection.


- "Cleared Hot!"- This is a story about Airmen".
by General (Retired) John P. Jumper, Chief Of Staff for the U.S. Airforce

In this photographic essay Nicholas Price has assembled in words and pictures a glimpse into the lives of men and women who serve in the greatest Air Force on the planet.
It is the greatest because of the Airmen you will meet in this essay. You will see images of pride and commitment, courage and honor, integrity and valor.
On the faces of every Airman you will see something else - the satisfaction that accompanies being devoted to something bigger than yourself.

For many years the Airmen assigned to Nellis Air Force Base have been responsible for setting the highest standards of combat capability, both in the air and on the ground.
You will enjoy a glimpse into the heart of our Nation's most demanding aerial combat exercise, Red Flag. For more than 30 years Red Flag has been the standard by which all other exercises are measured. I am proud to have flown in the very first Red Flag exercise when I was a young Captain in 1975, and in many Red Flags over the years including the 25th anniversary Red Flag in 2000 when I commanded Air Combat Command. More than 30 nations around the world have sent their air forces to Nellis to train with the best at Red Flag.

You will get a special look into the world of Unmanned Air Vehicles as you see the men and women of the 11 Reconnaissance Squadron and the UAV Battle Lab train and perfect this new and rapidly emerging form of warfare in the modern age.
You will learn that the Airman's work is not always in the air as you see the warriors of the 99th Ground Combat Training Squadron training our security forces to meet the entire spectrum of threats from around the world.
Finally, you meet many of the women who make up 20 per cent of our Air Force and see how the mission doesn't get done without them.

The foundation of our superiority in the air, in space, on the ground, and in cyberspace has developed in the classrooms, in the skies, on the ranges and on the flight line at Nellis. You'll see them all through the talent of Nicholas Price. His own passion has captured the devotion and sincerity etched in the faces of Airmen at work as well as the pride of Airmen who know that their work has been done well.

These are images that will be meaningful to every American who loves their country and are grateful for the remarkable men and women who serve.
Look deep into the faces you see and you will understand how fortunate we are to have these Airmen serving our nation, giving so much and asking so little. Yes, this is a story about Airmen.

Enjoy it.
THE CLEARED HOT MEDIA ROOM
Visit The Cleared Hot! Media Room for selected  news and media coverage of this collection that has spanned more than five years.

Honor Guard
This unnamed "Honor Guard" is seen protecting the American flag.
The female service member symbolizes the growing presence of
women and minorities in the U.S. Air Force.
B2 Spirit Refuel
The B2 "Spirit," an American bomber with
"low observable" stealth technology,
refuels at an Air Force Base.
Doggles
Man's best friend holds a special place within the U.S. Air Force
and is instrumental in detecting bombs and booby traps.
This K9 is pictured wearing protective goggles.
Shortly after the picture was taken, the K-9 team was deployed
to Iraq, where it assisted in a convoy support mission.
One of the K-9's reportedly rescued an airman from the aftermath
of a roadside bomb explosion.
F-16
Price used light and shadow techniques to capture the beauty and elegance of the F16 fighter jet
The F16 jet has become a symbol of America's military might.
Question Mark
A group of U.S. Air force men and women line up to receive ammunition for a training exercise
before deployment.
The lineup, seen at an unknown location in the Nevada desert,
is in the shape of a question mark.
HH60 Rescue
The U.S. Air Force stages a mock rescue operation during a
training exercise at the Nevada Test and Training Range
in the desert of southern Nevada.
Afterburner
Price captures the power of an F-15 fighter jet as an airman -
- seen underneath the afterburner -- tests its engine.
A Personal Message from Nicholas Price about the Cleared Hot! Project.

"There has been much talk about access being the secret of success in this project and yet though important in terms of obtaining these photographs this was not the making of the project.
I was not looking for the only opportunity out there and never approached this subject lightly and over a weekend. I went into this with my eyes open to the military universe and had to close my ears to the outside world.
It meant stepping off the world of push and shove, cat and mouse into a sanctuary of order, pride and courtesy. A place in which sacrifices were the norm and not so unique.

I had to take a year out of my life to get this done, a year in which I found myself turning turn down my most lucrative business opportunities and a host of commissions to get the job done and still those apparently huge sacrifices paled into insignificance when I saw men and women putting themselves in harms way at a moment’s notice, whether they were taking advantage of billions of dollars of technology to protect themselves or using their feet and hands to get the job done.

This moved from a fascinating project into a journey, one for both myself and those I was documenting. I was embraced as an outsider in their world, as my mission was soon clear, I was not a day tripper looking for jets, the so called shock and awe, I was not here to photograph the roar of high tech but the people that made that roar happen, those that made the cogs on this huge machine turn, use my artistic talent to capture theirs. To find out why pay was not the motivation and why a fellow human being was ready to put on the uniform and make a commitment to his or her country and fellow man without regard for their own safety.

This was an awakening for me and I trust when you look at these faces and the associated scope of the missions it will be for you too." 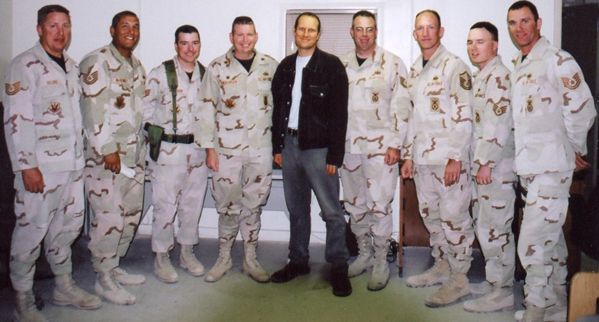